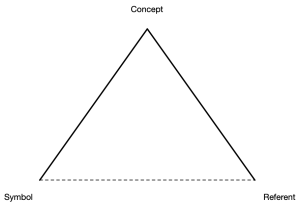 The above diagram is the standard Ogden/Richard triangle of reference.

But it is possible to have:

The symbol for a referent-less concept in (5.) is substituted for its referent. And it is here that often our understanding of the world breaks down.

For example, the process of invention usually begins with the conceptualisation something which does not exist (study case: iPhone). Eventually this is given a name and the physical product of the iPhone is manufactured and the referent iPhone is brought into existence. In other cases this creation process may not be possible (study case: Harry Potter). The only way it is brought into being is through the process of literature (writing and publishing a novel). Harry Potter only exists as a character in a novel, and not as a person as such. In this sense Harry Potter remains in (5.) never to become a real thing as in (1.). Only fiction about Harry Potter in the form of physical novels becomes (1.).